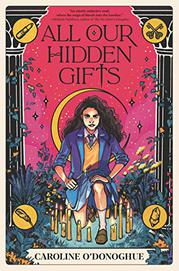 ALL OUR HIDDEN GIFTS

An Irish teen grapples with past misdeeds and newfound ties to magic.

When 16-year-old Maeve discovers a deck of tarot cards stashed with a mixtape of moody indie music from 1990, she starts giving readings for her classmates at her all-girls private school. Though her shame over dumping her strange friend Lily during an attempt to climb the social ladder at St. Bernadette’s is still palpable, it doesn’t stop her from trying to use the tarot in her favor to further this goal. However, after speaking harsh words to Lily during a reading, Maeve is horrified when her former friend later disappears. As she struggles to understand the forces at play within her, classmate Fiona proves to be just the friend Maeve needs. Detailed, interesting characters carry this contemporary story of competing energy and curses. Woven delicately throughout are chillingly eerie depictions of the Housekeeper, a figure who shows up on an extra card in the deck, echoing the White Lady legend from Irish folklore. Even more disturbing is an organization of young people led by a homophobic but charismatic figurehead intent on provoking backlash against Ireland’s recent civil rights victories. Most characters are White; Fiona is biracial, with a Filipina mother and White Irish father. Roe, Maeve’s love interest and Lily’s sibling, is a bisexual, genderqueer person who is a target for intolerance in their small city of Kilbeg.

An immersive tale of brave, vulnerable teens facing threats both real and fantastic.