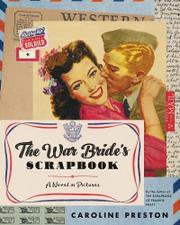 In her second fictional scrapbook, Preston (The Scrapbook of Frankie Pratt, 2011, etc.) uses real "scraps" she’s collected to magnify the effect of WWII on a newly married couple.

The war bride of the title begins her scrapbook in the fall of 1943 when her husband leaves for active duty 20 days after their first meeting. In her first section, “Life Before Perry,” bride Lila uses magazine art, advertisements, a business card, and whatever else can be pasted down to illustrate her childhood as the bright, chubby, “bossy” daughter of middle-class parents in prewar Charlottesville, Virginia. Her upwardly striving mother sends her to posh Sweet Briar, a Southern women’s college near Lynchburg, to make “the right connections”; in reaction, Lila pastes a photo of an unhappy grad with the found caption “I Flunked in Romance.” Although a senior seminar sparks an interest in architecture, she returns home to work in her father’s car insurance business. With headlines from LIFE and Charlottesville’s Daily Progress announcing the war, Lila takes a job at the university’s Bond Drive office, begins sharing a co-worker’s apartment, and loses weight. Ads for shorter skirts and rye crisps display 1940s style in the shadow of war maps. Perry answers Lila’s ad for a new roommate, and the “Our Romance” section begins. Despite his UVA architecture degree and acceptance to the graduate program at Harvard Design School, Bostonian Perry has enlisted in the Army. Movie tickets, recipes, and architectural sketches trace the couple’s platonic first two weeks. Then come the kiss, proposal, and elopement, highlighted by a copy of Eleanor Roosevelt’s advice column against furlough marriage. A short, passionate honeymoon complete with naked sketches follows. Then Perry’s off to Europe. “Life Without Perry” follows the couple’s predictable correspondence—each facing challenges and evolving in ways that will prove consequential—within the context of war memorabilia that WWII enthusiasts will gobble up. Perry’s “Homecoming” is understandably bittersweet.

The book's visual and verbal components combine to make a narrative of definite—if slightly generic—charm while hinting at darker depths under the entertaining surface.