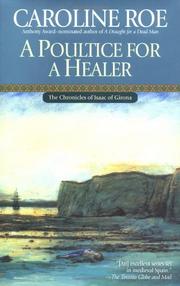 A POULTICE FOR A HEALER

The Chronicles of Isaac of Girona

Poor Daniel the glove trader. First, Isaac asks him to postpone his wedding to Isaac’s daughter Raquel until his wife Judith recovers from the birth of their new son. Then Judith asks him to postpone his wedding until Isaac recovers from a spell of weakness. And then, just when things are looking up, Mordecai, a wealthy Jewish businessman, sends him off to Mallorca to discover whether Ruben, a cousin’s grandson, is dead or alive. It’s not an idle question. So far, two Rubens have appeared in Girona claiming kinship, and their appearance has coincided with several poisonings, perhaps instigated by these journeyman herbalists. The Bishop is concerned, and so is Isaac, a true healer who, with the help of Raquel and his apprentice Yusuf, soon finds himself identifying foreign accents, sniffing at henbane and other toxic brews, interrogating a notary and his apprentice who unwisely revealed the contents of various wills, and setting in motion a plan to exonerate one of the Rubens and accuse the other. Finally, all is well, freeing Daniel and Raquel to marry. Mazel tov.

Semi-interesting descriptions of the separate-and-not-quite-equal Jewish and Christian communities, gossips, whores, and the tendency to nibble on nuts and olives in this seventh adventure (A Draught for a Dead Man, 2002, etc.) from pseudonymous Roe, better known as Medora Sale.