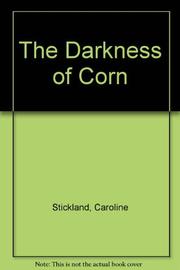 THE DARKNESS OF CORN

Strickland (The Standing Hills, 1987) offers another fine English rural village tale of the 19th century—a time when marriage for some women could be a vise, forever set in place by the ancient taboos and mores of an isolated society. Beatrice Randall, against the wishes of her gentle and intelligent family, married somewhat beneath her (in her bumptious youth, she would have married anyone who professed love) to miller Daniel Fayerdon, who sniffed out the business advantage of becoming related to Beatrice's corn-merchant brother-in-law. But he also enjoyed the prospect of a lady being his to ``order and humiliate.'' Now, Beatrice is miserable in the home of callous Daniel, who's greedy, boorish, and abusive to all—except his witchlike mother and a cat. Then, however, Beatrice finds a wonderful if dangerous joy with Boaz Holt, a homesteader whose wife, Esther, has left him, felled as she was by the grief at the loss of their child. Beatrice becomes pregnant by Boaz. Meanwhile, echoing Beatrice's disastrous marriage and aftermath is working woman Canader, who's been actually ``sold'' in a ``halter divorce'' (which Beatrice, hidden, witnessed) by her hated ne'er-do-well husband Nat to loving, tender Matthew Garth. The two women, grasping at joy instead of hatred, become friends. But Daniel is plotting evil for Matthew, and Beatrice and Boaz—even before Esther's return—realize that there was love between them ``but it was not for each other.'' Before a peaceful outcome, there's violence—and Daniel becomes a victim of his own ugly nature. A story of trapped women and haunted men within an almost articulate countryside—from the pale greens of spring to winds ``that could force men to their knees.'' Strickland writes with the sinewy simplicity and chimney-corner warmth of a riveting storyteller.