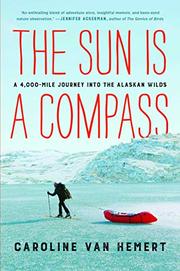 THE SUN IS A COMPASS

A 4,000-Mile Journey into the Alaskan Wilds

A research wildlife biologist at the U.S. Geological Survey Alaska Science Center recounts a stirring wilderness adventure set against the background of a young woman juggling family, career, and a passion for rough country.

From the Pacific rainforests of Washington state to a remote corner of the Alaskan Arctic, it was an often grueling, 4,000-mile journey by foot, skis, raft, and canoe that few would have attempted, even such experienced wilderness travelers as debut author Van Hemert and her husband, Pat. In 2012, the author, who had begun to question her devotion to science, and Pat, a home builder driven by wanderlust, embarked on an expedition that would succeed or fail on human power alone—no roads, no trails, no motors—and test the limits of their endurance on some of the harshest and most unforgiving terrain in the world. Van Hemert chronicles their journey in sharp, sometimes-harrowing detail, though not so minutely that the narrative bogs down in the exigencies of living in the wild. While she discusses their various triumphs and travails, the author fully expresses the wonder of what they saw and experienced, who they met along the way, the microcultures they encountered, and how the journey brought her back to a love of scientific inquiry (if not to a love of the laboratory). After a brief in-progress report, she opens with the couple's personal histories and motivations for undertaking the trip. What might have been perfunctory actually adds depth. For all the readers’ vicarious thrills and Van Hemert’s admirable writing, it is the author’s candor regarding her doubts and her appealing vulnerability that make this memoir so resonant.

One follows this engrossing adventure feeling as eager as the travelers to see what's around the next bend in the river, on the next island, across the next coastal passage, or over the next mountain pass.