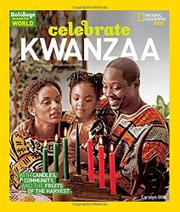 With Candles, Community, and the Fruits of the Harvest

From the Holidays Around the World series

by Carolyn B. Otto

An overview of the modern African-American holiday.

This book arrives at a time when black people in the United States have had intraracial—some serious, some snarky—conversations about Kwanzaa’s relevance nowadays, from its patchwork inspiration that flattens the cultural diversity of the African continent to a single festive story to, relatedly, the earnest blacker-than-thou pretentiousness surrounding it. Both the author and consultant Keith A. Mayes take great pains—and in painfully simplistic language—to provide a context that attempts to refute the internal arguments as much as it informs its intended audience. In fact, Mayes says in the endnotes that young people are Kwanzaa’s “largest audience and most important constituents” and further extends an invitation to all races and ages to join the winter celebration. However, his “young people represent the future” counterpoint—and the book itself—really responds to an echo of an argument, as black communities have moved the conversation out to listen to African communities who critique the holiday’s loose “African-ness” and deep American-ness and moved on to commemorate holidays that have a more historical base in black people’s experiences in the United States, such as Juneteenth. In this context, the explications of Kwanzaa’s principles and symbols and the smattering of accompanying activities feel out of touch.

A good-enough introduction to a contested festivity but one that’s not in step with the community it’s for.