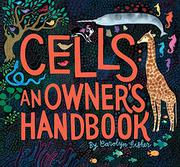 A stylish introduction to the structures and functions of cells, starting on “the derrière of a Boston terrier.”

Congratulating readers on being the owners of “37 trillion high-performance cells,” canine skin cell Ellie defines them as the difference between living and nonliving things. She then goes on to explain that each “itty-bitty building block” from red blood cell to sperm and egg has one or more jobs, how mitochondria and other organelles contribute to the effort, and (with help from a “cellfie”) how cells make more cells. Fisher incorporates text large and small in hand-lettered styles into swirling, exuberant painted images that more often suggest rather than clinically depict various sorts of cells and creatures made up of them; they definitely capture the breezy vein of the cellular tour, however. Ellie doesn’t get to a few things—meiosis, for instance, or viruses—but she covers considerable territory…and once she’s done (“I gotta split!”), the author finishes off with jokes, a source note for the “37 trillion” claim, and leads to more-detailed surveys of the topic.

A lively once-over that gets further beneath the skin of its subject than first glances might suggest.