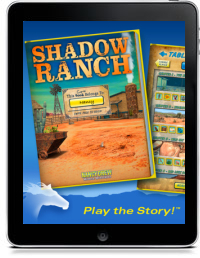 From the Nancy Drew series

by Carolyn Keene & developed by Her Interactive

A text-centered but gamer-friendly e-version of one of Nancy Drew’s more popular cases.

Reworked from the most recent revision of Nancy Drew #5: The Secret of Shadow Ranch (1931, 1965, 1993) and its 2004 video-game version, this iteration sticks to the same general plot but runs through multiple tracks. The updated, present-tense narrative (“Y’all ain’t gonna be textin, tweeterin and titterin while the rest of us’re singin, are ya?”) is liberally strewn with links to “collectible” icons, color spot art with touch-activated sound effects and side games (horse races, “hidden object” tableaus and word scrambles, for instance). Readers can also decode messages, identify suspects, affect events at frequent intervals by making choices (though sometimes there is but one “choice” offered) and even listen to abbreviated versions of cowboy songs. Children fond of skipping ahead will be frustrated, as in the first run-through the eight chapters can only be read in order, and some choices lead to dead ends requiring a return to the chapter’s beginning. For all the video game–style illustrations and the requirement that readers sign in as “players,” there is very little animation—but the mix of cliffhangers and interactive distractions should keep both budding sleuths and video addicts absorbed.

A repackaging, by and large, but rich in features and close enough to the originals to preserve their attractions.