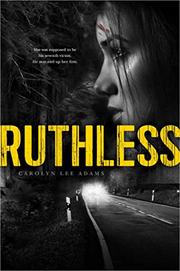 Can 17-year-old Ruth’s relentless drive to win save her from a serial killer?

When she’s competing or training Tucker, her horse, Ruth Carver pushes herself to the limit to be the best. In fact, the other girls who take lessons from her mother at the stable, part of Ruth’s family’s farm, call Ruth “Ruthless.” Waking in a dark vehicle and sure she has a concussion, Ruth knows she’s been kidnapped and vows to follow her sheriff grandfather’s advice to do anything to escape. When she meets her wolflike abductor and learns she’s not his first victim and that he wants to show her the error of her high-and-mighty ways, Ruth knows this fight will take every ounce of resolve and smarts. She escapes, naked, into the Blue Ridge Mountains’ wilderness, but the “Wolfman” has plans to get his seventh victim back. Seattle screenwriter and sometime stand-up comic Adams’ solid-enough debut plumbs the depths of serial-killer and bitchy-teen psychology in alternating chapters of back story that trade off with Ruth’s present-tense narration of her harrowing experience. Ruth is a strong character, but her nickname fits, and even in extremis she may be more unlikable than sympathetic. Several high-adrenaline set pieces dot this at-times improbable and repetitive thriller.

A between-books read for avid fans of survival fiction and serial-killer tales.