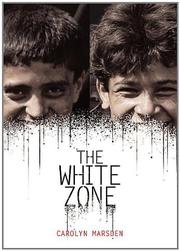 Shiite Nouri is devastated when a Sunni martyr kills his uncle. Hakim’s death is the first personal tragedy the boy has suffered since the Americans came to Iraq. He begins to take out his anger on his half-Sunni cousin, Talib. Although the two boys have always been close, Nouri and his mother soon begin ostracizing Talib and his Sunni mother, Fatima. Talib is also isolated from his friends at school, where his cousin is intent on highlighting his cousin’s Sunni heritage. After the Sunni bombing of a Shiite mosque, Talib is banned from his school altogether. Nouri’s final destructive (and anonymous) action is enough to convince Talib’s family to move to the market where Talib’s bookseller father plies his trade—and which is bombed, causing the devout Talib’s faith to wobble, with potentially catastrophic consequences. As with many of Marsden’s works, the ending is tidy and hopeful, while some of the child characters (particularly Talib) seem wise beyond their years. Timely though this effort is, the differences between the two factions of Islam may prove too subtle for many readers.

A decently executed exploration of the American presence in Iraq and the tensions between Shiites and Sunnis.