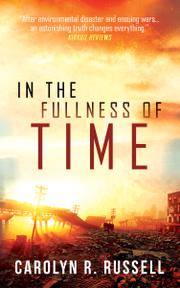 IN THE FULLNESS OF TIME

In this YA dystopian thriller, a teenage girl fighting against a fascist government learns an astonishing truth that changes everything.

After environmental disaster and ensuing wars, the future in the United States—now just “States,” divided into tyrant-ruled Factions—seems grim for most. Air and water are unclean, most animals are extinct, food is scarce, and homelessness is rife. Seventeen-year-old Somerset Whitman is more fortunate than most; her family are clerics, and for generations they’ve lived in a huge “Tempedral,” where, Somerset says, “It’s our job to take care of the ornate building and brainwash seekers into requesting Reverie”—a event that no one returns from. Secretly, Somerset works with a resistance cell to sabotage the government, which is already on shaky ground due to low food supplies. She also has a new responsibility in taking care of Monica, an orphaned little girl, and has a burgeoning romantic interest in Jake, the piratical new cell leader. Amid growing unrest and crackdowns, Somerset and others must take refuge in a safe house: “I don’t know for sure what’s happening in the other Factions, but it’s end-of-days outside of here,” reports Jake. Just as things look bleakest, Somerset discovers the secret of what Reverie has become. Although Russell (Same As It Never Was, 2018, etc.) combines some familiar elements of YA dystopian and romance fiction, she does so with intelligence and energy. For example, it turns out that society’s collapse began after the destruction of disease-bearing mosquitoes—which had unintended consequences. Russell also creates a believably paranoid atmosphere and shows how propaganda and advertising contribute to propping up fascist governments. However, the book never feels didactic thanks to Somerset’s naturalistic narration and well-rounded characterization. For example, she’s very much a stereotypical teenage girl in how she avoids chores, but she’s also a brave fighter and protective toward Monica. The cliffhanger ending suggests that further installments are planned, which would be welcome.

An intriguing and thoughtful adventure.