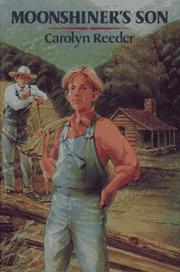 New folks are turning up in the hollow where June Higgins is training his son Tom, 12, as a moonshiner—a demanding craft handed down in their family for generations. Meanwhile, the new preacher's daughter, Amy Taylor, is out to thwart makers of a substance she thinks of as pure evil; Andy, a friendly collector of tales, is glad to share a jug or even help out with the still; and, drawn by bootleggers coming to the area during Prohibition, there are revenuers. Adroitly, Reeder sets up her story to explore some complex issues. June, illiterate but a community leader and a grand storyteller, takes pride in maintaining high standards while others degrade their whiskey with shortcuts suggested by bootleggers. Moonshine is a regular feature at local work-parties and other traditional gatherings; it's also known to start fights and cause abuse. Tom becomes friends with Amy, in the process realizing that a misleading partial truth may be the moral equivalent of a lie; learns to read at the Taylors' new school; discovers that he, too, is a gifted storyteller; and resolves, dramatically but plausibly, to give up moonshining despite Pa's fierce opposition. At the same time, Mrs. Taylor makes available a new source of income by locating a market for Appalachian crafts, and her husband mellows enough to become more accepted. Another fine offering from the author of the much- honored Shades of Gray (1989): with strong, memorable characters and a compelling plot, an unusually thoughtful and well-crafted historical novel of these mountain people. (Fiction. 9-14)