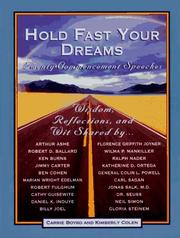 A compilation of 20 college commencement speeches, some very recent (Florence Griffith Joyner in 1994, Ken Burns in 1993) and some relatively old (Dr. Seuss in 1977, Ralph Nader in 1981), arranged in alphabetical order by the speakers' last names. There are no common themes or revelations, just an unrelated group of speeches by a varied group of speakers, among them Colin Powell, Ben Cohen (of Ben & Jerry's), Cathy Guisewite, Carl Sagan, Marian Wright Edelman, Wilma Mankiller, Robert Fulghum, and Billy Joel. Many of the pieces are not very inspiring and some don't translate well from oratory to the printed page, as when Jimmy Carter tells his audience at Rice University, ``We make our living writing books. My wife's only request was to announce to you that our books are still on sale.'' The final selection is Gloria Steinem's, who says in her 1987 address, ``I conducted a small survey in preparation for today. Half of my sample could not remember who their commencement speaker was.'' Colen (Peas and Honey, not reviewed, 1995, etc.) and Boyko provide an introduction and brief biographies for each speaker. (b&w photos) (Anthology. 16+)