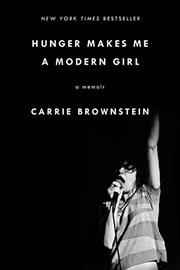 HUNGER MAKES ME A MODERN GIRL

First-class account of the life and times of an essential riot grrrl and the band she helped create.

In this debut memoir, Brownstein, co-founder of the iconic punk band Sleater-Kinney, traces her evolution from the daughter of a secure but secretly unhappy home—closeted gay father, anorexic mother—to a gawky teenage rock fan and, ultimately, to becoming an artist in her own right. (She does not delve into her work on Portlandia.) The story of her life is also, inevitably, the story of her own band: meeting (and having a close but tortuous relationship with) co-founder Corin Tucker, the endless process of writing and co-writing songs and guitar leads, firing drummers (they went through three before striking gold with Janet Weiss), and the way life on the road both forges and fractures relationships. For Sleater-Kinney fans, the book is an absolute must, as it not only describes the rise of the band, but also delves into the making of every album. Furthermore, for a band in which song authorship has never been perfectly clear, Brownstein gives some insight as to who wrote what. More than that, the book is deeply personal, an act of self-discovery by a writer both telling her story and coming to understand herself at the same time. “In Sleater-Kinney,” she writes, “each song, each album, built an infrastructure, fresh skeletons.” The author writes focused and uncluttered prose, choosing the best, most telling details, as she recounts stories that show what it means to perform for the first time and what it means for a woman to be both a fan and a star in a staunchly male-dominated world.

Unlike many rock star memoirs, there’s no sense that this book is a chore or a marketing effort. It’s revealing and riveting. On the page as in her songs, Brownstein finds the right words to give shape to experience.