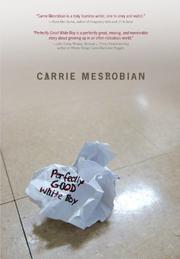 An honest, insightful novel about a young man’s final year in high school and his eventual decision, which he initially conceals from his family, to join the Marines.

At the outset, Sean spends a lot of time ducking the chiding of his overbearing older brother and cursing the crappy rental he and his mom have lived in since she left his alcoholic father. When he manages to hook up with superhot Hallie the summer before she leaves for college, he thinks his luck may finally be changing. However, as he navigates his way through an emotionally trying senior year, it turns out instead to be his friend and co-worker, Neecie, whom he just may be falling for. Intensely introspective first-person narration suits Sean’s stoic character very well. His thoughts are often both subversively smart and hilarious—particularly in their treatment of the subtext of communication across gender. When Hallie worries that he’s upset that she doesn’t want to have sex at first, he thinks, incredulously: “Was she kidding? We were almost naked. My hands were on her tits. She was giving me a handjob. Why would I be mad?”

Engaging, perceptive, witty and at times gut-wrenchingly sad—this is an extraordinary addition to fiction for teens and adults alike.