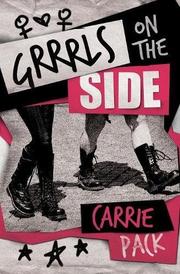 GRRRLS ON THE SIDE

A teenage outcast finds herself in the riot-grrrl scene.

White, fat high school sophomore Tabitha is bullied for her size and a sexual identity she has yet to claim, but she finds solace in punk music and her “absolute disdain for all that is mainstream.” Attending a Bikini Kill show, she’s handed a zine with information about a local riot-grrrl meeting, and after getting up the nerve to attend, she finds a group of young women working to smash the patriarchy through creativity, activism, and mutual support. She falls in with the group and comes out as bisexual, embarking on a relationship with white longtime member Kate. As their relationship grows rocky, Tabitha begins to develop a close friendship and intense chemistry with a new member of the group, Jackie, who is black and butch. Pack’s characters call out problematic behaviors and ideologies, and, while occasionally preachy and didactic, her book earnestly tackles biphobia, racism, and microaggressions, gender presentation, body image, and intersectionality. An author’s note written after the 2017 Women’s March on Washington situates the narrative in the early 1990s and explains the contemporary relevance of the riot-grrrl movement. Snippets reproduced from the characters’ zines are scattered between chapters, providing additional insights into their inner selves and an authentic replica of a cultural moment.

Like the riot-grrrl movement itself, unsubtle but full of heart.