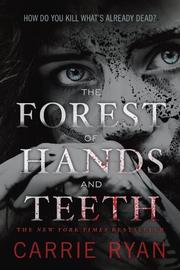 THE FOREST OF HANDS AND TEETH

It’s been generations since the zombie apocalypse, and the people of Mary’s village know they are the only living people left. In this overly introspective zombie tale, Mary despises her circumscribed life. Penned in by fences keeping out most of the flesh-eating Unconsecrated, destined to marry the brother of her beloved Travis, Mary dreams of the ocean her mother’s told her of. Her miserable village life won’t last much longer, though. When a visitor arrives from another village, the ascetic Sisterhood who control every aspect of village life secretly imprison the visitor, then (inexplicably) turn her into a super-fast Unconsecrated and set her loose among the rest. Fences fall before the onslaught of this super-powered zombie and Mary finds herself one of only six survivors, desperately searching for safe haven. Mary’s an unlikable heroine, obsessed with Travis (with whom she spends an oddly sexless interlude in a barricaded house) even as everything she knows is destroyed. But despite plot holes, more angst than action and an excess of philosophical meanderings, Mary’s story delivers what’s important: zombie apocalypse. (Science fiction. 12-14)