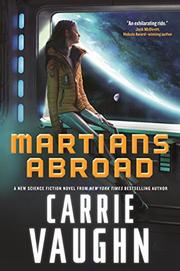 Vaughn (Dreams of the Golden Age, 2014, etc.) offers a stand-alone that finds a Martian colonist struggling to adapt to life on Earth.

When Martian-born teenager Polly Newton and her twin brother, Charles, are forced to leave their home on the red planet to attend the Galileo Academy on Earth, she is enraged. How dare her mother thwart her plans to intern at the astrodome by sending her “dirtside” to “old, grubby, crowded, archaic, backward, stifling”—not to mention heavy-gravity—Earth? Beyond Polly’s chagrin at this setback to her original plan to become the captain of a starship, she senses there is more to this forced journey than the simple opportunity to get a stellar education. On Earth, Polly, Charles, and the other offworld kids struggle to adjust to eating animal flesh and living under an open sky. After drawing attention to herself by getting in trouble for taking an unauthorized ride on a cycle, Polly gains the admiration of the other students and bonds with a group of friends. When suspicious, dangerous events begin to occur, Polly’s initial instincts that something is amiss at this academy for the elite are confirmed. In narrator Polly, Vaughn creates a feisty, intelligent protagonist and places her in what is essentially a classic school story, albeit one with spaceships. In her future, racial and ethnic differences exist but are downplayed, societal friction introduced in the offworlders’ contact with the Earthers, who sneer at their accents and backward customs. It is Polly’s teen snarkiness and strong sense of self that will have readers rooting for her to get to the bottom of the mystery.

Reading far more like a book for young teenagers than one with a strictly adult audience, this easygoing adventure has an affable appeal.