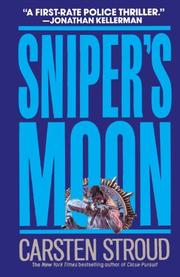 Canadian journalist Stroud's first novel is an epic police thriller whose overblown plot is tethered by a net of gritty detail--detail similar to that featured in Close Pursuit (1087), his standout account of a week in the life of an NYPD homicide cop Detective Frank Keogh used to be a respected NYPD street cop just like his dad, but now he's a police sniper, spending his time waiting coldly to execute felons--like the young, hostage-holding gang member he takes out in the novel's slam-bang opening action sequence. After each ""kill,"" Frank feels ""a kind of sweet sadness,"" which his colleagues are ominously beginning to interpret as stress-induced bloodlust--a suspicion that seems confirmed when, at another crime scene, Frank snipes (without authorization) the brother of hard-bitten professional thief Sonny Beauchamp. When a hostage-negotiator who has a beef with Frank, and then a policewoman he beds (breaking up his marriage), are strangled by the same modus operandi as victims in a case his dad apparently solved decades earlier, Frank finds himself wanted for murder. Determined to clear his name, he runs, precipitating a nationwide manhunt as he heads west looking for clues into the years-old case. At the same time, Sonny Beauchamp trails him, bent on vengeance, and Frank's dad comes out of retirement to help his son. Out West, Frank, ever the cop, twice foils crimes-in-progress before he's finally nabbed in Arizona--but he's soon released as his dad digs out the key to the current stranglings: a preposterous plot jumble involving mad doctors, identity switches, and homosexual intrigue. The villains are caught, and finally Sonny Beauchamp is too, leaving Frank to reconcile himself with his wife, his shattered career, and his internal demons. As tangled as a plate of spaghetti, but also crackling with narrative energy, punched-up prose, and a deep-grained savvy about cop ways and mores: Stroud's a thriller writer to watch.