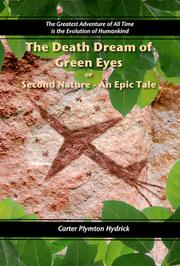 THE DEATH DREAM OF GREEN EYES — OR — SECOND NATURE, AN EPIC TALE

An anthropologist encounters a prehistoric man in this SF novel.

Anthropologist and former child prodigy Ruby and her colleague Dr. Steve Reily have done the unthinkable. They’ve broken through the final and greatest barrier to human progress: that of time. In doing so, they’ve accidentally brought three prehistoric humans into the present: a Chalcolithic man (known as Man With Green Eyes for his distinctive feature) and his two children, 10-year-old boy Voice of the Wind and infant girl Mourning Dove. The rest of Green Eyes’ people, the nomadic Soldiers of the Ibex, were recently killed by the settled Metal Men. When oddly dressed strangers appear a few days later, Green Eyes assumes they are Metal Men as well: “Appearing from nowhere, the strange Metal Men who had such powerful magic had hardly moved; had not even run for cover. Great medicine seemed to accompany great stupidity, which seemed impossible. But surely their brains must have fallen out on the ground.” After Green Eyes kills two of her teammates, Ruby—who speaks a reconstructed form of his language—manages to capture him. As she begins to study and understand this 6,000-year-old man, she realizes that she is staring into the face of humanity’s past, present, and future all at once. Hydrick’s (Critical Mass, 2004) prose is elegant and inventive, especially the chapters written from Green Eyes’ perspective: “Blowing wildly in the stiff, cool current of the mountain reaches, Green Eyes felt his pitched bangs wobble under the exhilarating force….Waiting, anticipating, he was not sure what form the battle would take, only that there would be battle.” The plot develops slowly, but it is immediately compelling, and the author smartly alternates between his two protagonists to maximize the sense of collision. The book’s strong philosophical bent is balanced out by the deeply considered and well-dramatized worldview of Green Eyes and the way that it challenges Ruby’s perspective. The novel’s self-aggrandizing title aside, Hydrick has achieved a subtle and realistic work of soft SF that places, in a rather visceral fashion, the human soul at its center.

An imaginative and thought-provoking tale of human experience, present and past.