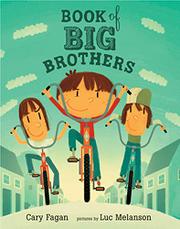 Growing up with two older brothers is never boring. The youngest of three looks back over his childhood, beginning with Mom bringing him home from the hospital (a story that he doesn't remember but has often been told). His brothers are so anxious to hold him that he's accidentally dropped...and smiles. This sets the tone for his whole life. Whether it's entertaining him with a pirate play when he's sick in bed with the measles, burying a dead pet together or camping out in the backyard, his big brothers are there for him. And now that he's older, the three don't live in the same house but still manage to get together occasionally—and to dream. It's a lovely story of brotherhood, told with heart and simplicity and plenty of specific details to give them weight. Melanson's digital illustrations are stylishly childlike, although they are sometimes too young and/or too literal for the substantial text. This flaw is a small one, however, given the unusual and touching nature of the whole. (Picture book. 6-8)