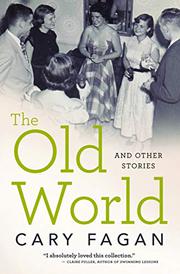 THE OLD WORLD AND OTHER STORIES

A collection of microfiction takes anonymous photographs as its inspiration.

Fagan (Little Blue Chair, 2017, etc.) has tapped into one of storytelling’s most pleasurable impulses in his newest book of short stories: imagining the stories behind quotidian images. But rather than simply generate work using old photos that have been separated from their original context—a worthy exercise for any creative writer suffering a block—Fagan makes the images part of the story, printing the black-and-white photos before each tale. The result is a collection that lets readers peek behind the curtain of the creative process while also keeping the pages turning. Readers will wonder, for example, what Fagan will make of a photo depicting a boy marionette facing a skeleton. As it turns out, in “Who I’ve Come For,” it’s a macabre Punch and Judy show about the unexpected nature of mortality. With a photo of a woman at a piano, in “The Traveller,” Fagan creates an unexpected story of escaping an unhappy marriage. A dour, bespectacled girl inspires a dialogue between two concerned school authorities in “Subversion.” Aside from the clever concept of the book, Fagan is also smart to recognize the need for variety to keep things surprising. Many of these stories are quite funny; others aren’t afraid to be earnest or skirt sentimentality. And it’s not just the tone that varies, but the structure, as well. Fagan gives us a soldier’s diary, short plays, letters, meeting minutes, and even a dialogue between a woman and her beloved pet crow. The stories don’t always land, especially when Fagan works too closely from the photographic inspiration, but the overall premise never loses its inventiveness.

Fagan’s clever and wide-ranging stories put the act of imagining front and center.