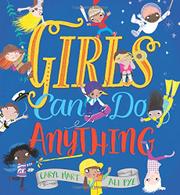 GIRLS CAN DO ANYTHING

Narrated in bouncy verses (with occasionally stumbling rhythm), this title catalogs the myriad possibilities that exist in being female and the varied activities that girls do. Girls with diverse skin tones, hair colors and textures, and clothing styles are presented as almost unfailingly smiling as they explore, play sports, make art and music, conduct experiments in science. Refreshingly, some are depicted using wheelchairs or wearing glasses or hijabs. The infectious, cheerleaderlike tone is unsurprising and repeats the anthem “I’m a GIRL! I’m FANTASTIC! I’m strong, brave, and proud!” The cartoony, energetic artwork is appealing overall, with front endpapers presenting a gallery of possible career choices. However, some illustrations are unsuccessful in conveying information. For example, a spread highlighting genuine female science and medical luminaries features roughly rendered two-toned portraits that are hard to recognize; the face of Dr. Alexa Canady, America’s first African-American female neurosurgeon, is blue. A similar misstep occurs on the back endpapers, an album of 15 illustrated, labeled naïve-style paintings, rather than photos, of renowned women, including Jane Goodall, Serena Williams, and Malala Yousafzai. They and the other, lesser-known but equally shout-out–worthy, notables, including Nicola Adams, “the first female and openly LGBTQ person to win a boxing gold medal at the Olympics,” look disappointingly generic, though at least these diverse women’s skin tones remain identifiable.

Leaves no doubts that girls are to be cheered on and reckoned with.