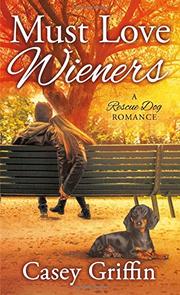 A veterinary student and a CEO toe the line between business and pleasure as they juggle work, play, and their dachshunds, all while trying to figure out who is threatening a beloved animal rescue center.

Piper Summers isn’t having a good day. Not only has she gotten fired from two of her three jobs—driving taxis and delivering pizzas (leaving her only to perform singing telegrams)—but her taxi is stolen from right behind her, with Aiden Caldwell’s briefcase inside. Aiden, the CEO whose lap she had just fallen into during a singing telegram gone wrong, is instantly drawn to her, and when they come across each other yet again, he offers her a job: walking his new dog, Sophie, who happens to be very friendly with her dog, Colin. Circumstances continue to throw them together, which is great—unless those circumstances include increasingly severe damage to the rescue center where Piper volunteers. Debut author Griffin gives the reader a satisfying blend of romance and mystery while also taking the time to give us real—if a touch predictable—characters with their own personality hurdles to jump and realizations to make. Blend in an appropriate amount of playful banter and dog shenanigans, and you’ve got the makings of a promising start to a new series.

A delightfully adorable mystery-romance with a well-planned plot. And dogs!