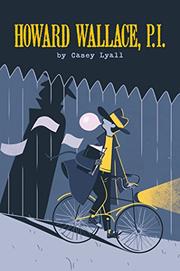 Twelve-year-old Howard Wallace is obsessed with Sam Spade and other hard-boiled detectives, and he runs his own detective agency (brown bathrobe standing in for the trench coat) from his home and school offices. He solves cases and hands out bills, using his proceeds to buy stashes of his favorite gum and care for his beloved, ancient bike, Big Blue. When a new case involving a stolen student-council checkbook lands in his lap, Howard reluctantly takes on a junior partner, new girl Ivy Mason. (The two characters are likely white.) Almost immediately, the duo starts getting anonymous threats telling them to drop the case. Who’s behind the theft and threats? The rich, connected student-council president? Her BFF, who lost the election for treasurer to Howard’s client? The disgruntled faculty adviser? Or someone even more unexpected? Canadian author Lyall’s debut is a middle school mystery that offers a few laughs, believable characters, and enough realistic kid detecting to keep young PIs turning pages. Through Howard’s references to noir detective greats, readers in the target audience who have no reference points for such will begin to learn the tropes of the genre. Once it gets going, the mystery is engaging enough to carry them past bumps.

Likely to see sequels; Howard and Ivy deserve them.