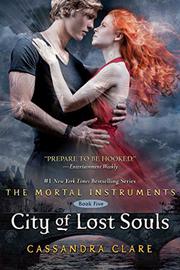 From the Mortal Instruments series, volume 5

What with the race to save Jace from the new Big Bad, wonderful secondary characters get short shrift.

Clary's long-lost brother Sebastian, raised to be an evil overlord by their father (and Jace's foster father), has kidnapped Jace. While the many young (or young-appearing) protagonists want Jace back, only Clary swoons in constant self-absorption; her relationship angst, resolved two books ago, can't carry volume five the way it did earlier installments. The heroic, metaphysical and, yes, romantic travails of Simon, the daylight-walking, Jewish vampire with the Mark of Cain, would have made a more solid core for a second trilogy then Clary's continuing willingness to put her boyfriend ahead of the survival of the entire planet. The narrative zips from one young protagonist to another, as they argue with the werewolf council, summon angels and demons, fight the "million little paper cuts" of homophobia, and always, always negotiate sexual tension thick enough to cut with an iratze. Only the Clary perspective drags, focusing on her wardrobe instead of her character development, while the faux-incestuous vibes of earlier volumes give way to the real thing. The action once again climaxes in a tense, lush battle sequence just waiting for digital cinematic treatment. Clever prose is sprinkled lightly with Buffy-esque quips ("all the deadly sins....Greed, envy, gluttony, irony, pedantry, lust, and spanking").