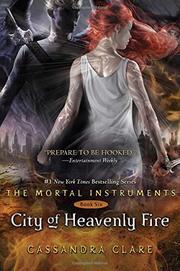 From the Mortal Instruments series, volume 6

The myriad magical, societal and romantic story threads of two series and nine books conclude without living up to the series’ purple promise.

Clary, Jace and a cast teeming with their supernatural—and supernaturally pretty—peers come together to defeat Clary’s literally soulless brother Sebastian. Instead of a slow reveal of mysteries until an inevitable climactic fight, the action of this series closer starts with a deadly attack in the prologue and continues through constant battle over the course of just over a week. Sebastian wants to rule the world (or possibly just get revenge on his mommy for never loving him), and he has phenomenal cosmic powers. A constantly shifting point of view in a world where Sebastian’s flunkies are always fomenting evil somewhere means the action is nonstop, yet somehow the pace drags. With so many characters at stake (even the surviving players from Clare’s steampunk Infernal Devices trilogy have a vital role), action and dialogue are continually derailed. Wit is another casualty, with the characters’ snark and pop-cultural cleverness taking a back seat to a gloopy spaghetti tangle of angst. Dedicated fans of the series will still find enjoyment in the daddy issues, wolfish grins and howling demons, though satisfying resolution plays second fiddle to setup for yet another series.