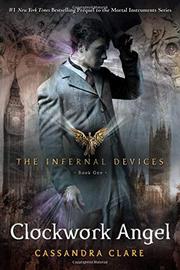 From the Infernal Devices series, volume 1

A century before the events of Clare’s Mortal Instruments trilogy, another everyday heroine gets entangled with demon-slaying Shadowhunters. Sixteen-year-old orphaned Tessa comes to London to join her brother but is imprisoned by the grotesque Dark Sisters. The sisters train the unwilling Tessa in previously unknown shapeshifter abilities, preparing her to be a pawn in some diabolical plan. A timely rescue brings Tessa to the Institute, where a group of misfit Shadowhunters struggles to fight evil. Though details differ, the general flavor of Tessa’s new family will be enjoyably familiar to the earlier trilogy’s fans; the most important is Tessa’s rescuer Will, the gorgeous, sharp-tongued teenager with a mysterious past and a smile like “Lucifer might have smiled, moments before he fell from Heaven.” The lush, melodramatic urban fantasy setting of the Shadowhunter world morphs seamlessly into a steampunk Victorian past, and this new series provides the setup for what will surely be a climactic battle against hordes of demonically powered brass clockworks. The tale drags in places, but this crowdpleaser’s tension-filled conclusion ratchets toward a new set of mysteries. (Steampunk. 13-15)