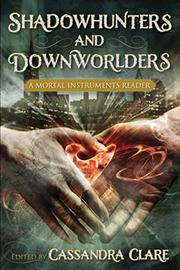 From the Mortal Instruments series

A selection of essays about the Mortal Instruments series edited by the series’ author offers a couple of gems and a lot that’s not.

Amid the mostly shallow veneration, a few entries stand out. Kate Milford's "Unhomely Places" is not so much about the Mortal Instruments series as it is a love song to New York as seen through the uncanny lens of the books. Michelle Hodkin, in "Simon Lewis: Jewish, Vampire, Hero," examines both the parallels and the contradictions of Judaism and vampirism, closely reading Simon to see the heroism in his complex combination of the two. Other essays miss the mark. Kami Garcia's "Why the Best Friend Never Gets the Girl," for example, uses John Hughes movies to explain why Simon would never date Clary; are there no recent appropriate cultural touchstones? Multiple entries heap praise upon the series for its incorporation of queer relationships and mixed-race characters, though none of those essays point out that these queer and mixed-race characters are never the protagonists. Most of the entries focus on the series' romantic aspects: incestuous tensions, one-sided crushes, brotherly love. Textual analysis sits side by side with "Malec" as a portmanteau describing the Magnus/Alec relationship, "OTP" to refer to the idea of a fan's one true pairing and Facebook relationship statuses to explain character interactions.

Self-serving, but enjoyable for committed fans