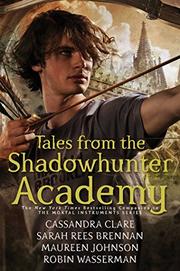 TALES FROM THE SHADOWHUNTER ACADEMY

After losing both his memory and his vampirism at the climax of City of Heavenly Fire (2014), Simon Lewis can't bear to be around the nigh-strangers who were once his best friend, his Shadowhunter allies, and his girlfriend, Isabelle. What better way for Simon to regain his lost life than to attend demon-fighting school, prepare to drink from the Mortal Cup, and hope Ascension grants him both phenomenal cosmic powers and his lost memories? Over the course of two years, the white, Jewish Simon goes from being a gangly nerd to someone who fits in among the "near perfect specimen[s] of humanity" who are his classmates. Though Simon builds a social network among both Shadowhunter and mundane students, the institution itself never becomes any less stunningly discriminatory (the mundanes, as "dregs," live in the slime- and rat-infested basements, for instance), making Simon's efforts feel futile. Simon himself measures his own improvement by gaining enough bulk to "trade in his ladies'-sized gear for a men's size." With chapters originally published as individual e-books over the course of 2015, this compilation shows its seams; the characters and setting are reintroduced every 60-odd pages.

Stuffed with cameos from nearly every character of note from the Shadowhunter universe, there's not even enough room here for fan service