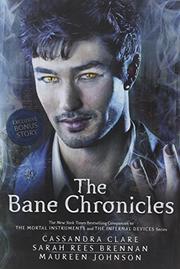 The tales begin in 1791 Peru, where the debauched Magnus Bane revels in sex, alcohol and troublemaking. They close in the present day, concerned with relationship dramas and the battles of the prior books. Standing alone, the early stories (featuring a fashion-obsessed Magnus hopping into bed with all attractive comers) are mostly dissatisfying. Taken as a whole, however, the collection shows compelling development of Magnus from flirtatious playboy to flirtatious playboy with a secret heart of gold to the fashionable-but-serious High Warlock of Brooklyn who throws himself between innocents and danger. The volume stands as support for Clare's multiple ongoing series and features too many tales that break off without resolution, satisfying mostly as emotional background for Magnus and his found family. Occasional choppy prose isn't Clare's usual mode, though there's plenty of the more-typical grandiloquent stylings: Eyes are like "grass under the dew," "a crystal glass filled brimful with crisp white wine and held up to catch the light of a blazing sun" or "deep alluring lakes with sirens in their depths." There is less snark as well, perhaps a result of the collaboration with Rees Brennan and Johnson.