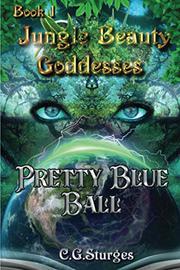 Some “multimillion miles” away from Earth lies a planet called Ventopia, on which there’s an opulent palace. It’s home to two cosmic beings named Dematter and Nebula, and to say that they’re a power couple would be an understatement. About 14 billion years ago, they caused the creation of the universe, simply by kissing. The pair later created septuplets (all girls), whom they give a planet to care for on their 7 millionth birthday. That planet would later be known as Earth. In between sips of lavender tea, the sisters get the hang of DNA coding and conjure the many creatures of our world. As with any group of siblings, though, disagreements run rampant. Still, the siblings eventually get around to creating humans, and they give their new creation abundant natural resources and intelligence. But when the humans wreak havoc on their environment and each other, the sisters must decide whether to intervene. Sturges’ vividly imagined story progresses at a carefree pace, with the result that that it takes a few chapters before events really get moving. Reader will likely guess early on that this group of cosmic sisters will be creating Earth as we know it. Before this point, however, there are less compelling events, such as a “Deity Ball,” which serves partly as a vehicle for describing, at length, how magnificent the girls appear: “Kalahari’s toasted tan face looked especially beautiful.” Readers will already know what the girls look like, though, as the author’s photos of cloth dolls depicting them can be found throughout the book. Greater substance arrives once the humans enter the picture, and the tale takes some dark, unexpected, and inventive turns that underscore the seriousness in all the wildness.

A slow-burn narrative, but one that overflows with imagination.