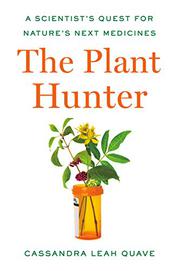 A Scientist's Quest for Nature's Next Medicines

Ethnobotanist and microbiologist Quave, a professor and herbarium curator at Emory, shares a fascinating account of her development as a scientist, her research into the pharmacological potential of plants used in traditional medicine, the challenge of balancing work with motherhood, and her lifelong struggle with disability and infection. Born with a congenital defect that left her right leg underdeveloped—the fibula was “totally missing”—Quave had her leg amputated below the knee when she was 3, resulting in a staph infection that would have killed her if not for antibiotics. As she grew up, she required 20 more surgeries and often was hospitalized with infections. Her health problems made her acutely aware of the power of antibiotics and the peril of bacterial resistance. “We’re facing a double crisis in the battle against superbugs,” she writes, “the loss of effective antibiotics and the cataclysmic failure of the economic model that supports their discovery and development.” Despite being physically compromised, Quave has mounted research expeditions to rugged, biodiverse hot spots around the world in search of some of the 33,443 plant species used in medicine; of these, she notes, no more than a few hundred have been rigorously investigated. The author details the painstaking process of gathering, transporting, preparing, and analyzing plant samples to test whether or not ethnobotanical research actually could lead to discovery of drugs. She also describes the arduous competition for grant money, where being a woman often put her at a disadvantage. Throughout her career, Quave has encountered bullying, sexism, and outright sexual harassment, and her scientific accomplishments have been undervalued. Science, she notes with regret, has become a “blood sport” among powerful men. Without generous funding for research into superbugs and infectious diseases, Quave warns, humans will find themselves increasingly at the mercy of viruses and bacteria they cannot control.