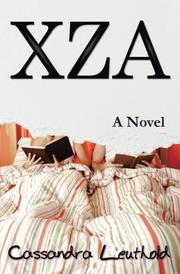 Leuthold’s debut novel explores the lives and loves of an author and one of her devoted readers.

Alexandria Zenobia “Xan” Alexander enjoys her successful career as a writer. Under the pen name XZA, she’s published several edgy, controversial novels that explore the challenges faced by young women. She’s strong and independent, particularly when it comes to relationships. At a book signing, she impulsively flirts with a handsome book reviewer named Michael Singer. Ten years later, Xan is living with him and struggling to find the perfect ending to her latest book. At the same time, she’s trying to come to terms with her past in order to understand why her relationship with Michael has endured. As Xan’s story unfolds, Leuthold offers a parallel narrative about a college student named Jessie. When she receives an unexpected gift of one of Xan’s novels from a former student named Willa, it reignites their friendship. As they bond over the book, Jessie starts to re-evaluate her school and career goals and her on-again, off-again relationship with her unsupportive boyfriend, Dick. Jessie provides an intriguing foil for Xan; although they’re at different stages in their lives, both question why they’re staying in their respective relationships. Unfortunately, these relationships also provide some of the book’s weaker moments. Michael is the perfect lover, caring, loyal and supportive, while Dick is rude, boorish and belittling, which leads to clichéd dilemmas, such as Xan wondering why she’s unable to say “I love you” to Michael and Jessie reflecting on why she clings to her unhealthy relationship. However, the author does skillfully keep the two main plots and multiple supporting characters clear and cohesive while also weaving in passages from XZA’s books. As the chapters alternate between Xan’s and Jessie’s stories, the fictional book passages show Xan’s character and her point of view as a writer.

This novel’s romantic problems often fall into routine patterns, but Leuthold’s insights into the transformative power of literature keep the narrative from becoming predictable.