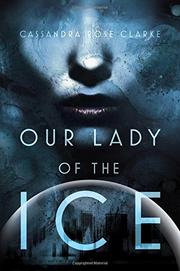 OUR LADY OF THE ICE

Lady Marianella Luna is a rich, beautiful woman with a problem, one she can’t bring to the cops. Instead, she takes her dilemma to a private eye, Eliana Gomez. Eliana eagerly accepts Lady Luna’s case—and her money—and begins chasing clues into the city’s underbelly. From this familiar opening, Clarke invites readers into an uncommon place: Hope City, an improbable metropolis built on the Antarctic ice and kept alive by a protective glass dome. In this alternate Earth, Hope City began as a Victorian-era amusement park, staffed by humans who immigrated to Antarctica as well as androids built for the park. The park closed in the 1940s and deactivated most of its androids, but the city endured. Now many citizens want to move back to the mainland, including Eliana: solving Lady Luna’s case will give her the funds to leave. Luna’s mystery quickly deepens, introducing Eliana to the city’s different elements (including gangsters and an Antarctic separatist movement) and to Sofia, an android that’s surreptitiously broken free from human control. The novel’s worldbuilding is phenomenal: Hope City’s past and present unfold effortlessly. At the same time, its female characters are particularly well-rendered: Eliana and Lady Luna forge a tentative friendship that feels real, while Sofia’s story is a refreshing take on whether an android should love or hate the humans around her. Unfortunately, what should have been a thrilling tale of detective work and sentient robots is dragged down by an unbearably lethargic narrative. Although each subplot is ingenious, the story lumbers from one story arc to another—conversations are drawn out for pages on end, characters examine their every passing thought—perhaps leading readers to feel they, too, are trapped in ice.

An ambitious novel set in a richly imagined world but impeded by its glacial pace.