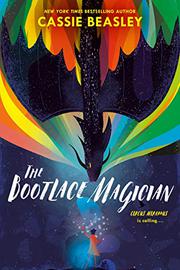 Micah Tuttle begins to discover the depths of his own magic in this sequel to Circus Mirandus (2015).

Micah, just passing his 11th birthday, becomes more at home in Circus Mirandus and spends time perfecting his charmed knot tying (and untying), using threads, shoelaces, and string as the mediums for his magic. He hopes to capture feelings and memories in the knots and to understand the mechanism by which a knot might remain connected to one in a thread far away. He is given the responsibility of caring for the baby unicorn in the Circus Mirandus menagerie. Micah’s kindness and his affection for the lighthearted creature, Terpsichore, lead him to wonder whether the foal wasn’t really abandoned by the other unicorns but rather deliberately left with the circus to protect its life. The wicked grandmother whose reputation haunts Micah emerges as a powerful threat to both the circus and the world at large. Micah presents as white; several other primary characters are described as having dark skin or non-European origins; and Micah’s friend from outside the circus is Latinx-implied Jenny Mendoza. Beasley’s taut third-person narrative, wholly focused on Micah, is refreshingly free of unnecessary fantasy flourishes. Complex yet efficient, her storytelling is warmly comfortable and sure-handed. Each member of the circus’ varied magical community has a gift and an important role to play, and all the magic feels genuine and believable.