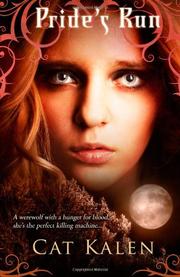 An abused teenage werewolf escapes from a nasty drug lord and flees for Canada with a handsome werewolf boy.

Pride is an underweight, 17-year-old girl who lacks confidence, but she’s also the most feared captive werewolf in the California drug world. She’s smart, fast and fearless. As the best tracker in the compound, she’s sent to kill her owner’s enemies. During the training courses that determine who will be fed, she’s always put up against the deadliest alpha wolf, Stone, who loathes her.  Pride relies on the power of her inner wolf; to buoy her hopes, she believes she’ll someday escape her imprisonment by the man who killed her parents. When she realizes that she’ll be forced to mate with Stone on the next full moon, Pride knows she must break out immediately. Fortunately, she’s sent on a tracking mission the following day. She takes off, and just when she thinks she’s relatively safe, she realizes the person she was sent to capture is also a shifter werewolf. In a moment of chaos, the two make a run for it together into the snowy mountains. With the Paranormal Task Force and her former captor’s men on their trail, the two shifters attempt to stay alive long enough to make it to freedom. The rest of the story focuses on the sexual tension between Pride and her new companion, Logan, and is further complicated by Stone, whose intentions may have been misunderstood. Can these two paranormal teenagers make it out alive? Will Pride go back to save the others? This story is what it is: a straightforward, fast read about supernatural, horny teenagers with a lot of issues.

Heartbreak, hormones, awkward teenage werewolves and the possibility of a love triangle, a good book for tweens and Twilight fans.