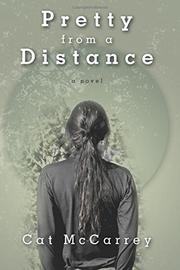 Pretty from a Distance

A woman tries to shed her troubling past with the help of friends—and fate—in this debut novel.

Glorianna is assaulted by her boyfriend, Vince, and a lecherous bar patron and winds up bloodied, face down on the pavement outside the bar. An angelic, unknown man comes to her rescue, but his presence is fleeting. Five years later, Glorianna is still with Vince, and their nomadic wanderings in a camper have led them to Corona d’Espinas, N.M. Quiet, wise Fred lives in a trailer nearby; he suffers from panic attacks, just as Glorianna always has. He introduces her to several other warm people: the spitfire waitress, Valerie; the chatty bar owner, Roy, and his mystic wife, Sonia; Roy’s handsome nephew Doug and his daughter Melanie; and Casey, the sheriff. Glorianna grows close to all of them, especially Doug, but still endures Vince’s physical and sexual attacks at night. Her new friends drop hints that she could do better than Vince, but still she returns to him, despite the revelation that Vince is seeing another woman. Doug and Glorianna continue their budding relationship, and she promises herself that she will have a new life by the new year. But in the novel’s dramatic crescendo, startling news from Glorianna’s family reveals her past secrets, provoking Vince to do his worst. Readers may have difficulty keeping track of the novel’s dozens of characters, but their dialogue and interactions are flawless, creating a warm Southwest community with just enough local color. The story’s most puzzling aspects are Glorianna’s attraction to Vince and her decision to remain in their relationship. Their tangled past isn’t fully revealed until well into the novel, and for much of the novel, Vince’s characterization isn’t particularly complex. Readers may wish that the novel had better explored why Glorianna stays with Vince, and what her life could be like without him, instead of anchoring the story in their violent relationship.

A highly readable, if uneven, novel featuring characters that will be hard for readers to forget.