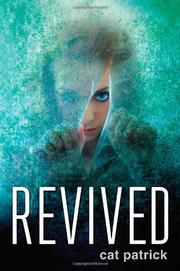 A well-done exploration of a teen’s growing understanding of death, even though she herself has died five times.

Daisy lives with two agents from the ultra-secret Revive project. Revive is a drug that can bring people back from the dead, and Daisy was first revived after she died with 20 other children in a bus accident. Severely allergic to bees, she’s stung and dies again, forcing the “family” to relocate to Omaha with a different last name. Daisy wants to stay in Omaha after she meets Audrey, a girl who quickly becomes a real friend, and Audrey’s brother Matt, to whom Daisy finds herself irresistibly attracted. But Daisy learns that Audrey has terminal cancer, and she knows that Revive can’t help her friend. Although the story turns suspenseful when Daisy discovers a previously unknown Revive case, the overriding thrust is its examination of human emotions. Once Audrey dies, Daisy must confront the reality of death, no matter her own experience. Patrick writes an easily readable story that moves well and populates it with attractive characters. The added dimension of Audrey’s real, irreversible death contrasting with Daisy’s experience gives the story more gravity than the usual suspense fare.

Good entertainment with some unexpected depth.