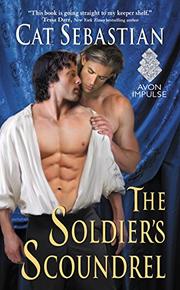 A familiar Regency opposites-attract romance becomes something freshly seductive in the hands of a skilled newcomer.

After a decade in the army, shaken by the depravity of the Spanish battlefields and disabled by a gunshot wound to the leg, Oliver Rivington returns gratefully to the social order of Regency London and the cosseted life afforded him as the son of an earl. He doesn’t anticipate having to visit the offices of Jack Turner, a rough-and-ready fixer to whom his sister Charlotte paid 200 pounds for services Oliver shudders to imagine. Turner takes one look at the gorgeous nobleman and is reminded why he went into business in the first place: to help others get out from under the thumbs of men like Rivington. Raised in the slums of St. Giles, the son of criminals, Jack now uses his rather shady skill set for good. He’d like to send Rivington on his way, but the memory of stumbling upon the handsome blond in a rapturous embrace with another young fop gives him pause. "There were few enough men who shared Jack's preferences—let alone sons of earls—that he certainly wasn't likely to forget a single one." Realizing they must work together to help Charlotte out of her predicament, each utilizes tactics afforded to him by his social position. Watching Jack, who has a kind of Sherlock-ian cleverness, pursue his quarry is one of the unexpected delights of this intelligent novel. Sebastian deploys dialogue, especially the men's frequent disagreements, to great and often hilarious effect. When the sexual tension becomes too much to resist, the way forward is clouded by social disapproval, Oliver’s unreflective obedience to the law, and Jack’s distrust of both the nobility and his own heart. Sebastian turns in a solid suspense plot, but the impeccably constructed psychology is the winner, with its intricate layers of motives, desires, and fears.