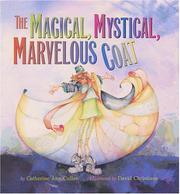 Joseph may have Had a Little Overcoat (1999) and another Joseph a “coat of many colors,” but neither sported outerwear like the outsized garment with magic buttons that swirls and flows about this generous youngster’s skinny ankles. On her dancing way she encounters a frozen swan and a giant who’s wilting under the hot sun, a small elf who needs somebody to love, three rabbits menaced by a snake, a ship in a storm—and look, there’s a button to remedy each ill. Nor does she hesitate to give them away, though to her parents’ dismay it leaves her (seemingly) buttonless. To Cullen’s rollicking dactyls Christiana matches splashy, spacious scenes rendered in bright, transparent colors, changing point of view on nearly every spread until the triumphant conclusion, in which the child finds the missing buttons in her pocket, and everyone she’s helped appears at the door to help her sing the adventure out. “It’s fashion, it’s couture, it’s high, and it’s haute, / That megacooliferous, / truly meltificent . . . mostly just marvelous coat!” A showstopping, imagination-stretching debut for Cullen, visually on par with Christiana’s previous extravaganza, Nancy Willard’s The Tale I Told Sasha (1999). (Picture book. 6-8)