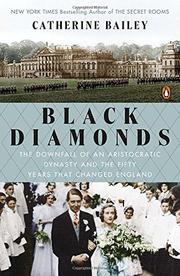 TV producer and director Bailey (The Secret Rooms: A True Gothic Mystery, 2012) uses the downfall of the Fitzwilliam family to examine the history of the coal industry in England.

The author’s remarkable story primarily covers the time of the seventh Earl of Fitzwilliam, who inherited the title in 1902. She shows how class differences and the effect of two wars, strikes and the final blow of the postwar Labour government brought down many of the aristocracy. The Fitzwilliams lived at Wentworth House, one of England’s largest privately owned homes. Bailey uses accounts of the miners and their families to describe both the lives of the wealthy Fitzwilliam family and those of the poverty-stricken laborers. Low pay and long working days were hard enough, but when times were bad, the corporate mine owners cut pay and shortened the work week. After World War I, German reparations included providing free coal to the European victors, undercutting the English market and halving the earnings of the miners. The Fitzwilliams, especially the seventh Earl and his wife, were particularly well-liked, as they continued a feudal tradition of caring for their workers. “Lordie,” as he was known, insisted on maintaining the latest safety measures. During the long coal strike of 1926, they fed all the local children, organized games, created work on their other estates and even provided coal. The ruin of Britain’s stately homes and the end of coal as a primary industry were due to the steam engine, better transport and refrigeration, as well as the increase in inheritance taxes from 15 to 50 percent. Wartime nationalization of the mines and sequestration of estates served as the final blows. Gossipy bits—e.g., questioned legitimacy, grand entertainments and “Kick” Kennedy’s marriage to the Devonshire heir and subsequent affair with the ninth Earl—keep the reading lively.

The real value of this work is in the recounting of the ends of two classes, the lower and the very upper.