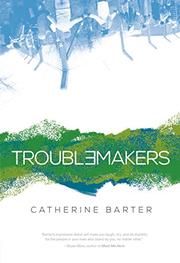 A 15-year-old London girl struggles with family tensions against a backdrop of bombings, crime, and political skulduggery.

Lena, whose mum died when she was only 3, has been lovingly raised by her brother, Danny (20 years her senior), and his partner, Nick. But Danny’s just gotten a job working for a law-and-order political candidate, and now there’s constant tension at home. There’s a bomber attacking East London supermarkets, and Danny’s boss—in statements Danny wrote for him—uses anti-crime language that Nick, who runs a hippie coffee shop that displays anti-establishment leaflets, despises. As the couple decide to separate to ease the tension in their relationship, Lena becomes increasingly curious about the mother she doesn’t remember, further infuriating her brother. Why is Danny so hostile toward their mother’s old friends? Real life is messy, Lena learns. As well as that: You don’t have to be political to be moral; good people sometimes do rotten things; doing right sometimes hurts the wrong people; and you don’t always get cinematic closure with the secrets of your past. Several secondary characters represent the multiculturalism of modern London; Lena and her family are assumed white.

Amid a thoroughly contemporary story about terrorism, email leaks, and a divisive political climate, Lena’s coming-of-age is wonderfully individual and heartbreakingly real