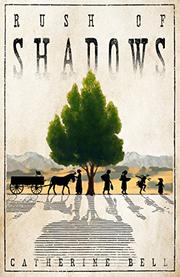 A vividly imagined historical drama of racial tension on America’s last frontier.
Spanning the turbulent years between 1855 and 1867, Bell’s debut novel follows the trials and tribulations of young newlywed and soon-to-be mother Mellie Pickett after she leaves the metropolis of San Francisco for the wilderness of Northern California with her husband, Law—“a man who could hardly read, a man who said ‘the-ay-ter’ and had never been inside one.” While the debate about slavery intensifies elsewhere in the country, Mellie and Law encounter a different conflict in their new home, which lies between the indigenous people native to the land and the white settlers arriving in search of unblemished country. Law is distrustful of—but not hateful toward—their neighbors, while Mellie, inspired by the example of her progressive father, makes an effort to better understand their customs and way of life. In the process, she develops a friendship with a healer woman she calls Bahé—whose skepticism about Mellie’s naïvely good intentions (“Got to be grown and still didn’t know how the earth gives and takes”) makes her easily the most likable character. Bell’s richly textured, well-researched narrative, which alternates between first-person chapters narrated by Mellie and third-person chapters following Law, Bahé and the rest of the valley’s ever growing population, captures the settlers’ varied attitudes toward Native Americans, as well as the uncertainty and indiscriminate tragedy of frontier life. While Bell’s prose occasionally errs toward the overwrought (“[a] heartless moon burned over the corral,” “blood over his shoulders like a cloak,” etc.) and includes a few too many tired devices such as letters and dreams, she writes with a natural ease and authority. From its first line—“It was a beautiful country, though I hated and feared it”—Bell’s is a nuanced, intelligently crafted debut.
This complex, confident novel introduces a promising new voice in historical fiction.