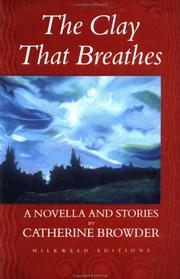 THE CLAY THAT BREATHES

Six stories and a novellaabout Japanese and Cambodians in the US and Americans in Japanin which Browder captures, as though under glass, small breakthroughs in understanding. ``Tigers'' is a subtle study, from the point of view of Daraa Cambodian teenager living in the US with her mother and American stepfather Tomof a complex family life and a past so horrific that the mother finds The Killing Fields ``too soft,'' while Dara ``couldn't remember the things my mother missed.'' ``Kisses'' is a touching character sketch of Tomura, a Japanese widower who comes to California and confronts his mortality. In ``Goodwill,'' Hmong refugees in a project, observed by a middle-aged black narrator, are incrementally initiated into American culture, especially once they have to deal with a ditzy woman brought to teach them ``life skills.'' Browder uses the narratorapproached by one of the Hmong children ``as if I was something from a foreign planet''to work small instances into tapestries of psychological and intercultural complexity. ``Sakurajima'' and ``The Altar'' turn the tablesAmericans must try to understand life elsewhereas does the title novella: a young apprentice potter, Eve, goes to Japan at the behest of her American teacher and stays in a ``six-mat'' room as she studies with retired potter Oita (``With the clay, you belong to Oita. In the house, you belong to his wife''). After a period of misreading everyone, Eve comes to seethe necessary lesson for an artist''How available time was here, and not to be hurried.'' With this debut, Browder joins Rohinton Mistry, Norman Rush, and Bharati Mukherjee, among others, as an original writer with an inviting multicultural perspective.