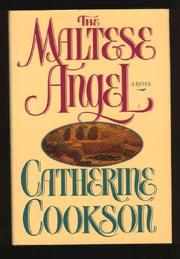 The fans of Cookson's (My Beloved Son, 1993, etc.) subtle-as- a-calliope village melodramas, set in various periods near the banks of the Tyne, will be pleased to note that the empress of scullery tales is still at it. Here (18861921) are the beloved Cookson constants: ardent lovers corroding into mad old men and women; children neglected or abused; enterprising violence; and always, the village—``a rotten spiteful lot of buggers.'' And, of course, lasting True Love. The Maltese Angel was the stage name of lovely Fanny, who had danced in a Newcastle theater and attracted the passion of upright farmer Ward, who was fair and kind. (It was Ward who had rescued and raised the horribly abused orphan Carl.) Ward does marry Fanny, but there's village trouble. Bumptious Daisy, who'd been certain Ward would marry her, feeling jilted, vows revenge. (And does she ever carry through!) Ward and Fanny have two daughters: Jessie, whom Ward is never really able to love, and his beloved, fragile Angela. Fanny dies young, as a result of some fancy work with a catapult (instigated by guess who), and Ward is on his way to madsville. He reaches the end of his sanity when Angela is raped by three village men, loses her mind, and bears a baby daughter, Janie, whom Ward will try to kill (she's rescued by Jessie). Little Janie, maturing, hated by crazy Grandpa and crazier Mum, finds affection with nearby Lady Lydia and her gentle son Gerald, who will become a conscientious objector in WW I. Happy endings for all—even Jessie, whose beloved Carl (now widowed) proposes. Cookson has the storytelling ability to hold an affectionately tolerant audience as she chronicles the howling passions of her characters, who resemble likable-to-murderous third graders. (Literary Guild alternate selection)