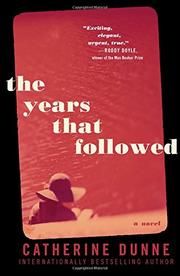 THE YEARS THAT FOLLOWED

The title of this novel is a puzzle. Which of the events or choices to be found here answers the question: followed what? The first and splashiest is a double murder—a hit—ordered by one of the two female protagonists, Calista, and discovered by the other, Pilar. The concern of the book, though, is not what follows this particular piece of violence but what caused it and what connects the two women despite their separate lives. Calista is from Dublin, the daughter of a wealthy Irish businessman and a well-bred Spanish mother. In 1966, when she's 17, she's seduced by 30-year-old Alexandros, an associate of her father’s, becomes pregnant, and is made to marry him and move to his family home in Cyprus. This is an old tale, but Dunne reveals the brutal power of the seduction—the way, when Alexandros forces himself on Calista, she convinces herself it's love. Pilar’s story echoes Calista’s in looping, interesting ways. She comes from a poor background in the Spanish countryside but, with fierce, cagey tenacity, crafts a life for herself in Madrid, coming to own and run the high-class apartment building where a murder will one day take place. Unlike her own mother, and unlike Calista in a nearby part of the world, Pilar is never abused by men. Nonetheless, she finds herself pregnant with few options and little support. The redemptive qualities of children (and the devastation that comes with their loss) factor into all the lives in this tale. Calista and Pilar are wonderful characters to watch develop as they weather this theme and as they work to define and enrich themselves against steep, cruel odds.

Lived-in, hard-earned feminism swirled with a noir tone and dark turns makes for a great read.