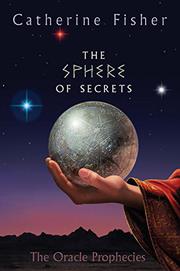 THE SPHERE OF SECRETS

Book Two of the Oracle Prophecies

Assassination attempts, double-crosses and plots within plots enliven this breathlessly paced follow-up to The Oracle Betrayed (2004). This offering finds Mirany, priestess and reluctant conspirator, and Seth, scribe and conniver extraordinaire, thoroughly ensnared in the intrigue surrounding the boy Archon Alexos—physical embodiment of the god—and General Argelin and Speaker-for-the-God Hermia, who together seek total worldly power. The trigger for this adventure is the Sphere of Secrets, offered to the Oracle by emissaries of the Emperor, whose plan to develop silver mines in the desert runs counter to Argelin’s dark goals. The Sphere, it turns out, is a map to the mythical Well of Songs, and it sets Alexos, Seth, the drunken bard Oblek and the mysterious lord-cum-thief known only as the Jackal questing across the desert while Mirany stays behind to endure a siege of the City by the thwarted minions of the Emperor. The narrative cuts back and forth from storyline to storyline in a series of mini-cliffhangers—which maintain an almost painfully heightened tension right to the end—that will have readers queuing for the concluding volume. (Fiction. 10+)