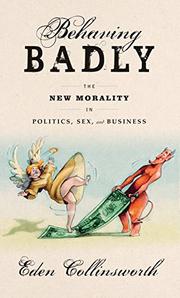 The New Morality in Politics, Sex, and Business
by Eden Collinsworth
BUY NOW FROM
AMAZON
GET WEEKLY BOOK RECOMMENDATIONS:

A nonscholarly discourse on manners, morality, ethics, and civility in these times of social upheaval.

London-based author Collinsworth (I Stand Corrected: How Teaching Western Manners in China Became Its Own Unforgettable Lesson, 2014) has run a publishing house, founded a magazine, written a bestselling book on Western manners for Chinese businesspeople, served as a consultant on corporate communications matters, and lived and worked all over the world. Thus she has a lot of access and connections, and she uses experts in various fields to address tricky issues of morality in areas ranging from sexual infidelity to financial malfeasance to drone warfare. “Where,” she asks, “does one find solid moral ground on what is proving to be the porous bedrock of our twenty-first century?” Toward the end, a friend asks about her “quixotic search for morality,” and most readers will agree that there have been few clear answers to dozens of knotty questions. But the author is always a genial guide through the moral thicket, and her companions underscore the provocative spirit of her quest. It begins with a convicted murderer who has come late to the whole notion of morality, which plainly wasn’t ingrained when he was involved in a couple of senseless killings. “As I grew in moral understanding, I began to realize what I had done,” he says. If morality is learned behavior, different cultures teach different lessons, and there are different contexts where behaving badly might vary significantly in terms of consequences. One of the more interesting examples concerns an American whistleblower in a Japanese corporation who was shunned because the shame he brought to the company that expected his loyalty was considered worse than the corruption he had exposed. Collinsworth is at her best with gender issues in general and sexual mores in particular, as she shows how technology has altered the playing field.

A wide-ranging, breezy journey through a series of ethical minefields.

IT MIGHT HAVE BEEN WHAT HE SAID
by Eden Collinsworth