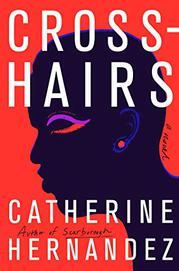 In her second novel for adults, Hernandez imagines a repressive near future that feels like a slight exaggeration of the present.

The narrator, Kay Nopuente, describes himself as a “Queer Femme Jamaican Filipino man.” Evan is the lover from whom he was separated when the Canadian government launched the final phase of Renovation—a program that relocates anyone who deviates from a White, cisgender, straight norm to labor camps. Kay is lucky in that he has been sheltered by the Resistance. Part of the narrative focuses on Kay’s training to join an armed rebellion led by Others like him and allies committed to using their privilege on behalf of Others. Part of the narrative is made up of Kay’s comrades telling their stories. And much of the narrative is Kay’s own account of escaping abuse at the hands of his mother and her church and finding a community where he could live freely as himself. One chapter offers scenes of an army veteran who has joined the Resistance teaching Kay to shoot a gun interwoven with glimpses of Kay receiving instruction in the finer points from a more experienced performer. The juxtaposition is powerfully affecting. Beyond that, the disparate parts of this novel are uneven in quality and don’t create an entirely satisfying whole. One issue is that several key characters end up feeling more like allegorical examples than real people. Another is that, while Kay is an engaging protagonist and the details of his life would be sufficiently compelling if this novel were simply the story of his life, this novel is not simply the story of his life. Every time the story shifts back into the past, the plot loses momentum. In creating the Renovation and the Resistance, Hernandez is borrowing science-fiction conventions without fulfilling their promise. Taken altogether, every aspect of the novel feels underdeveloped and unfinished.